It's safe to say that if you've made it this far in the season of MTV's new drunk-by-the-beach reality series Floribama Shore, you're a card-carrying fan. (It's OK. There are more embarrassing things in life.) Between the postcard-reminiscent setting, the wastey-face antics, and the over-the-top Floribama Shore cast, it's basically impossible to look away.

Of course, now that we're all invested in Floribama Shore, it's time to get down to some good old fashioned cast stalking. (To think Instagram wasn't around when Snooki first graced our screens!) Wondering where to find Jeremiah Buoni and the rest of the cast on Snapchat? We gotchu. Here are all the Snapchat usernames for the Floribama Shore cast and what to expect from their social feeds.

One glance at Gus's social feeds and you'll see that Tallahassee resident clearly fancies the way he looks — and with abs like that, who can blame him? Be prepared for an endless parade of muscles and smoldering looks on Gus's Instagram and Snapchat accounts, as well as a boatload of shots from his daytime gig as a romance cover model. This dude's got his Blue Steel down.

While Candace may seem like the most responsible person in the Floribama house, the Memphis native's social feeds still have an air of playfulness to them. In other words, there's no shortage of sexy selfies. That said, the 24-year-old beauty's Instagram and Snapchat accounts aren't all selfies, all the time. Get ready for photos with her friends, pics with the rest of the cast, and inspirational quotes.

It's only natural to compare the cast of Floribama Shore to the cast of Jersey Shore, and as of now, people have dubbed Codi the new Vinny. Sweet, funny, and with a slight "little brother vibe," the South Carolina waiter's Instagram (he doesn't have a public Snapchat) is exactly what you'd expect — loads of photos of himself having fun and being silly with his friends and family.

Chillin on the Cruise

If you're looking for photos of this fitness fanatic with his shirt on (or at least his giant muscles hidden), stay away from his social media accounts. This homeschooled Florida-native is all about his bod on Instagram and Snapchat. Also, if you're looking for workout tips or techniques, Jeremiah's accounts are where it's at.

Here's to my focus on the back!!! It's always awesome how you can see your body change right in front of you but it just makes all the work absolutely worth it😎😎😎#NoFiltersNeeded

Panama City Beach native Kortni has already been dubbed "Krazy Kortni," and with good reason: Girl loves to party. Like the rest of her castmates, Kortni's a fan of a good selfie, but that's not all you can expect from her social media accounts. Kortni tends to document her nights out with friends, as well as random ramblings from her couch. Also, she seems to have a penchant for Kylie Jenner-esque Snapchats, where she just poses while moving the camera around. Good stuff.

Another Panama City Beach native, 23-year-old divorcee Nilsa is on the prowl. In terms of her social feeds, really there's no sugar-coating it: this girl loves herself a bikini-clad selfie. And to be honest, with a bangin' bod like hers, we can see why.

One look at Kirk's Twitter, and it's plain that the dude is a die-hard Miami sports fan. His Instagram and Snapchat are a little more, er, personal, though. From his dapper selfie shots to photos (and videos) of him out and about with his friends, Kirk's life is obviously far from boring. Cleaning his room may not be his strong suit, though.

Aimee is on Floribama Shore for one reason and one reason only: To have fun. After learning that the guy she was dating back in Alabama got another girl pregnant, Aimee immediately stated that she's not interested in a relationship. Just one-night stands, please. Going off her Instagram and Snapchat accounts, Aimee's m.o. seems to be the same these days, as it's all sexy selfies, boozy nights out with friends, and memes about hot dudes. Hey, she knows what she likes.

Kayla Jo Is Stealing the Show on ‘Floribama Shore’ — and She’s Not Even an Official Cast Member! 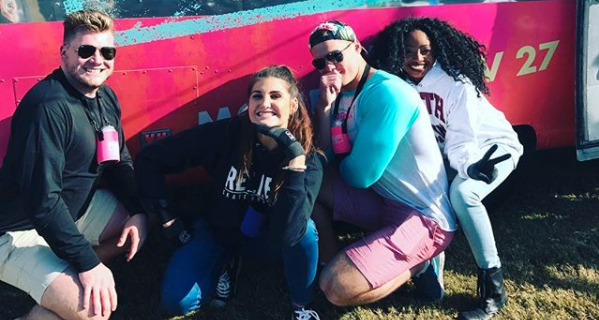 'Floribama Shore' Is About to Become Your New Obsession, So Here's What You Need to Know
Top stories