Honestly, it’s worth reliving a thousand Sammi and Ronnie fights just to see Pauly and Vinny at the helm of their Miami yacht, in a gentle embrace. “I can fly, Jack,” Vinny says. “Tell me to never let go.” “I’ll never let go,” Pauly answers. I believe it: Jersey Shore Family Vacation has been endless proof that there is no healthier and happier couple than Vinny Guadagnino and Pauly DelVecchio, all these years later. Definitely the anti-Ron and Sam, the two have been Jersey Shore‘s true power couple since day one, and 100%, I will go down with this ship even if it hits an iceberg.

And you know, maybe you guys feel a little uneasy by that declaration, regulating this passionate union to nothing but a safe “cute bromance.” I’m just saying that the fact that they refer to each other as boyfriend/girlfriend means that there’s a deeper bond there. Like, I don’t know, does anyone find it weird that Pauly D was the only person to enter the Miami house single and by the end of filming Vinny broke up with his girlfriend? I’m not saying Pauly’s the reason they broke up, but I am saying that Vinny and Pauly are madly in love and need to just make it legal already. Really, theirs is a relationship should all aspire to have. And if you remain unconvinced, let’s look back at their heartwarming story.

It Was Love at First Sight

If you peer into the Jersey Shore archives you’ll recall how the fogweller-pale college grad Vinny wasn’t keen on Pauly’s brand of guido, you know, the guys with the blow-outs, fake tans, and (fist pump, pushups) chapstick. Yet within seconds of laying eyes on Pauly D’s beautiful tangerine glow, Vinny was smitten. “First thing I see is a spikey haired guido kid and I’m like, ‘this kid’s perfect,’” he revealed in the show’s pilot. And it wasn’t one sided: just this year, Pauly revealed he was feeling a sparkage from the beginning.

“Yo, me and Vinny were always like, we hit it off, we were real cool,” he explained to fellow castmate Deena Cortese in an MTV look back at their relationship. “It actually started the first time we met, and someone pushed him at the night club, and I didn’t like that, somebody hit my boy. So I punched the kid in the face.”

And then, him Vinny ended up sleeping together. Hey, his word, not mine.

By their second stay at Seaside, all the guidos and guidettes were starting to settle down with steady S.O. And Pauly and Vinny? They were still going strong. In fact, we got to sit in on an their intimate date to Muscle Maker. The typical well-worn couple, Pauly was arguing with Vinny about directions on the ride over. “I’m definitely not breaking up with Pauly, we’re in a committed relationship and me and Pauly are going to take things to the next level forever.”

And to further prove his point, Vinny proposed to Pauly that very same season. “Pauly, we’ve been through so much together,” he said on bended knee, clasping Pauly’s hand. “Will we make this forever?”

“Yeah, we’ll do it,” Pauly replies. He also reveals to the cameras. “There’s only one guy in my life that I’ve had a romance with, and that’s Vinny.” POP THE CHAMPAGNE.

The Key to Any Successful Relationship? It’s Laughter

Of course, when two lovers live together, it’s so easy to have drama escalate. You can ask, oh, every other cast member of the show about that. And yet Pauly and Vinny have only strengthened their bond in the middle of this decade-long s–tstorm. How? Look to their love of pranks — Vinny revealed to US Weekly that a sense of humor is essential to a stress-free life (and love life). “Pauly and I manage to stay out of the drama ’cause…we feel like if we get involved with the drama we’re kinda gonna go crazy ourselves,” he said back in 2011. “So we try to just make a joke of everything. And if you make a joke of everything, then you have a good way of, you know, just being lighthearted at the fact that people are running into walls and getting champagne bottles thrown at their heads.”

And Yet Every Couple Has Their Ups and Downs

At the beginning of Season 5, Vinny struggles with his clinical anxiety and is itching to leave. The gang had gotten off the plane to Italy and went straight to the shore house, and he was feeling so locked up at the time. Like, I totally get why Vinny needed some alone time with his mom’s lasagna. All love and empathy, Vin. Unfortunately — and please queue up “My Heart Will Go On” for the next part — Pauly was left heartbroken by the thought of his boyfriend parting ways. “I just want to grab onto my dude and be like, ‘Don’t go, don’t go, don’t leave me,'” he recounted.

Don’t worry, kids, in a true rom-com fashion, Pauly eventually rallied the family and brought Vinny back, their relationship stronger than ever. But it’s important to note that Pauly gave Vinny his space to heal, and Vinny? “I went on a few different dates with a couple of other guys,” he revealed in the season recap. OK, but were you texting Arvin?

They May Have Left Jersey, But They Never Left Each Other’s Hearts

Even though Pauly D wanted to gain his independence with The Pauly D Project, he admitted he couldn’t do it without his life partner popping in. “I can’t go that long without seeing [Vinny],” he confessed. And there was no doubt that the two were the cutest couple at Deena’s wedding.

“I’m about to go to a wedding, I brought my date with me,” Vinny shared on Snapchat, giving the audience of glimpse of a suited Pauly.

“It’s not a date if you’re paying me, bro,” Pauly shoots back. Oh, don’t try to hide it, boys. In fact, Vinny even opened the door of his Ford Focus before Pauly got in. Only the best for his porcupine princess.

There are some people that will argue that Pauly/Vinny isn’t real, that once the cameras are off they don’t even talk, let alone spoon in a twin sized bed. And look, everyone’s entitled to their wrong opinion. Yet the one ray of sunlight in Jersey Shore Family Vacation is seeing Pauly and Vinny still so in love after all these years. They are proof that in a House of Chaos, you can still form a strong, loving relationship between a walking blow-out and a Keto Guido. I’ll never let go. And they definitely won’t either.

Relive Vinny and Snooki's 'Jersey Shore' Relationship, From Friendship to Fornication to Falling Out 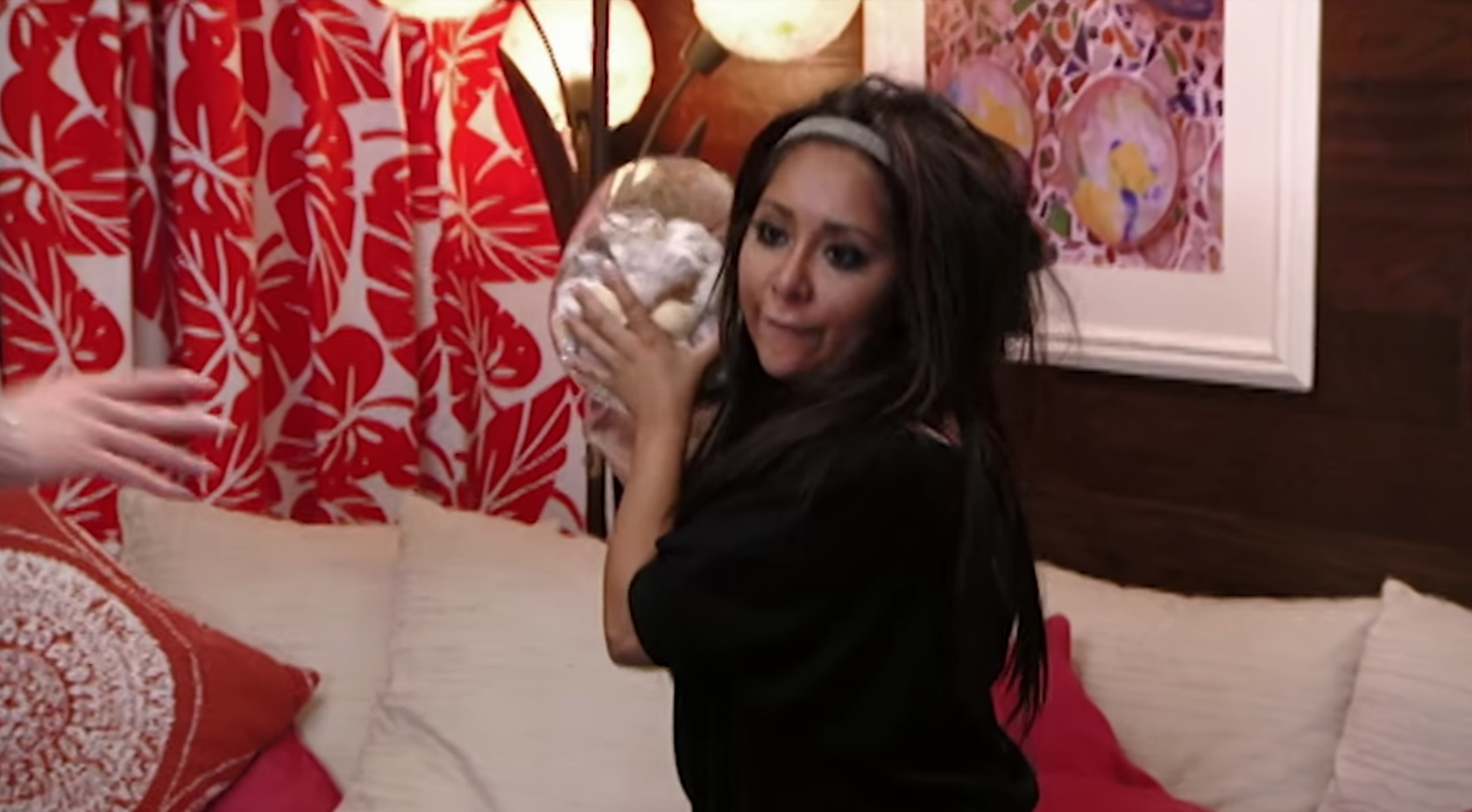