When it comes to celebrities who have never heard of a budget, Kylie Jenner most definitely comes to mind. The longtime Keeping Up With the Kardashians star, who has an estimated net worth of $900 million, is constantly showing off her designer wardrobe.

“While her closets are to die for, there isn’t enough room to fit all the shoes she owns — there are well over a thousand pairs,” a source previously told Life & Style. “She spends at least $300K on fashion every week. She has rooms full of things she’s only worn once.”

In the past, Kylie has purchased cars “just to match her outfits,” boasted the insider. Now that’s a flex. Of course, Kylie’s collection of high-end vehicles is nothing to scoff at either.

To date, the California native owns a $2.2 million LaFerrari Aperta, a $3 million Bugatti Chiron, as well as assorted Rolls-Royces, a Mercedes G-Wagon, a Ferrari 488 Spider and more.

As much as Kylie loves fashion and riding around in style, there is one thing she loves more: her daughter, Stormi Webster. With that, the proud mama “can’t help herself” when it comes to “showering” her toddler with “lavish gifts,” a separate source told Life & Style. 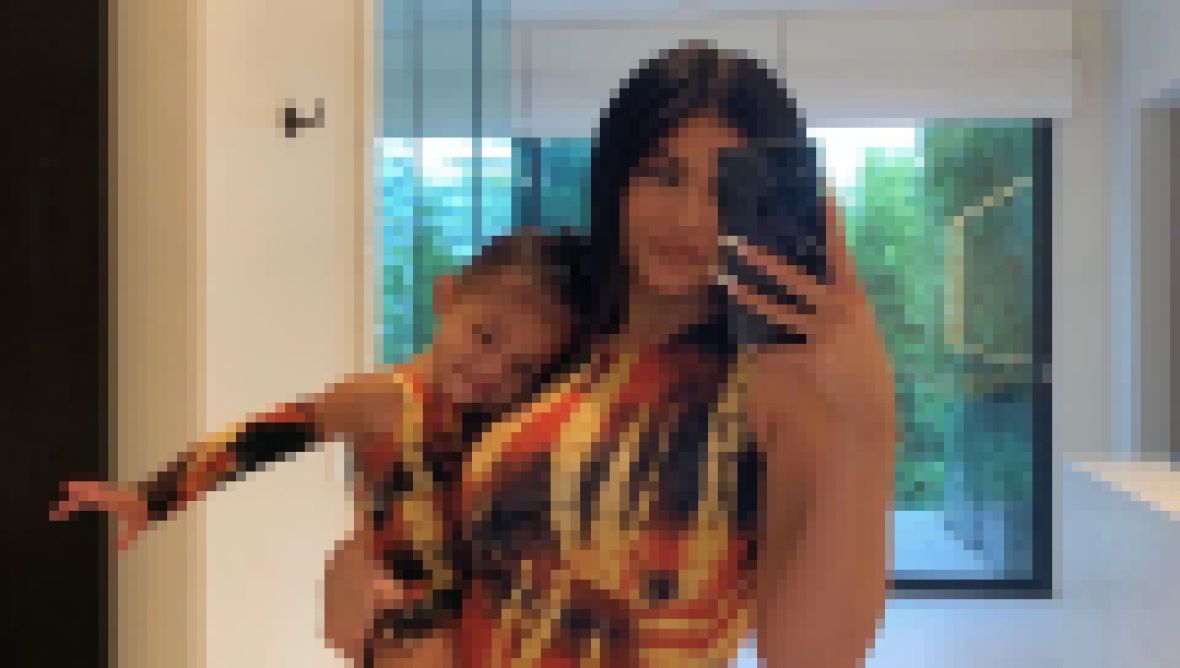 According to the source, money “may become an issue” for Kylie if she doesn’t “curb her spending,” noting the E! personality “blows through millions of dollars a month.”

However, at the end of the day, Kylie is smart about her finances. “She has a good head for business and invests a large chunk of her fortune in real estate, which she hopes to sell at a profit,” the insider assured.

Considering Kylie currently resides in a $36 million home in the ever-exclusive Holmby Hills neighborhood of Los Angeles, we think she’ll be A-OK! To see photos of her most expensive outfits and accessories over the years, scroll through the gallery below.

Kylie wore this custom Balmain dress designed by Olivier Rousteing himself for her 23rd birthday. The form-fitting piece will debut as part of Balmain’s Resort 2021 collection and costs a whopping $24,595.00.

Even Kylie’s undergarments are designer. This All Over Monogram Logo Mesh Lingerie Set from Gucci is priced at $1,100.00.

Kylie had a pretty ingenious hack with this outfit. She turned a $285.00 Charlotte Knowles London dress into a skirt and paired it with a matching $210.00 top.

You Guessed It, Even More Marine Serre

This time, Kylie matched her $333.00 Marine Serre top and $347.00 leggings with Stormi. The fashionista also paired the look with $780.00 Prada pumps, while her little one wore sneakers.

In the winter, Kylie was all about Saks Potts outerwear. This fur-lined jacket ran her $1,800.00 (or double that if she bought one for her BFF Anastasia Karanikolaou).

This colorful, cropped Saks Potts jacket was one of Kylie’s best looks all winter and retails for $801.00.

Chanel in the Wild

Balenciaga with a Chanel Handbag

Kylie forked over $529.00 for this Duygu Ay Collection floral corset dress. She paired it with $1,230.00 Gucci sunglasses and a Hermès Kelly ll Mini Veau Epsom Rose Azalee Bag valued at $20,000 and up.

While Kylie’s Maisie Wilen ensemble appears to be a jumpsuit, it’s actually two separate pieces. The top costs $420 and the bottoms retail for $320. Additionally, her Prada bag is priced at $1,290.

This is one of our favorite Kylie outfits ever! The Emilio Pucci scarf that she wore as a top costs $445, the Prada bucket hat retails for $595, the Hermès bag is priced at $26,500 and the Nike sneakers are $159.

Sadly, the pricing for the vintage Vivienne Westwood bustier is unavailable. However, given how gorgeous it is, we have no doubt it cost a pretty penny. As for Kylie’s jewelry in this sexy snapshot, the Bottega Veneta earrings cost $480, the Vivienne Westwood pearl choker retails for $590 and Dior bracelet is priced at $250.

A vision in orange! Kyle paired this $5,190 Bottega Veneta wrap dress with Gianvito Rossi strappy sandals, a $500 Jacquemus handbag and lots of gold jewelry — including a $1,605 Ruby Stella ring.

Kylie showed off some her fall fashion in this funky Charlotte Knowles London top and matching leggings. Each design is priced at over at over $400.00. She completed the look with a $2,425.00 jacket from the same U.K. retailer, as well as a pair of $779.00 Alexander Wang heels.

Kylie paired her $265 brown leather corset from Miaou with $395 matching pants. She also carried a $395 handbag from By Far.

Clearly, Kylie has her favorite brands. The (occasional) blonde stunned in this $680 dress.

While vacationing with her family in Lake Tahoe, Kylie dressed to the nines in this $710 Moncler jumpsuit, $1,875 Moncler coat and $575 Moncler boots. She also paired the look with $425 Dior sunglasses and a $2,730 ring.

As much as we love Kylie’s Charlotte Knowles London dress, priced at over $750, we have to talk about these shoes! The Tom Ford platform sandals retail for $1,250 — and they are worth every penny! The fashionista completed her look with oversized Dior sunglasses.