Buh-bye, Brad Pitt! Angelina Jolie is reportedly ready for her next A-list suitor. According to Heat magazine, however, the divorcée isn’t entertaining any old fling. In fact, she’s looking for husband number four. “Right now, Ange’s looking at potential suitors who have been suggested by her business team,” a source revealed to the publication. “She’s also putting the word out in high-powered circles.”

Question is, what prompted the 43-year-old’s change of heart? “Flying solo was beneficial for a while,” the source confessed. “Ange needed to heal after the breakup with Brad — but it’s been long enough and her self-imposed exile from men is over,” the source continued. “She knows a lot of people in the industry who are as good at matchmaking as they are at producing films.” Furthermore, the source confirmed that “seeing Brad move on has put a fire under her.” Hmmm, nothing wrong with a little healthy competition between exes, right? 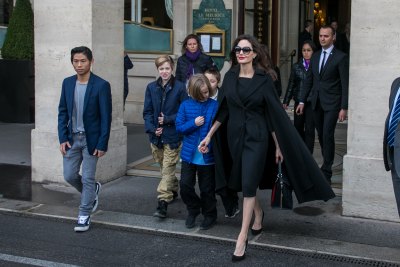 For those of you who are unaware, Brad and Angelina, or “Brangelina” as they were once called, spent 13 years together before sadly calling it quits in 2016. They share six children — Maddox, 17, Pax, 14, Zahara, 13, Shiloh, 12, Vivienne, 10, and Knox, 10 — and have since been tangled up in a tumultuous custody battle. However, just because things went south with Brad and subsequently, her other three ex-husbands, doesn’t mean the actress has given up! You go, girl.

“She hasn’t felt a real spark in ages and she misses it,” the source admitted. “She’d like someone who can match her intellect, but most importantly, she needs a physical connection.” Here’s hoping that Angie finds a man worthy of her soon enough. In the meantime, it’s safe to say that Brad will manage to keep himself busy. After all, the 54-year-old has reportedly been getting “very close” with his spiritual healer, Sat Hari Khalsa.

Malia Obama Is a Beach Beauty! See Her Best Bikini Moments in Pictures

Are Bachelorette's Michelle and Nayte Still Together? Split Speculation

Derek Hough and Fiancee Hayley Tease Elopement: 'There Is Temptation'

‘Moving Forward’! Kim and Pete’s Drama With Kanye Is ‘All Behind Them'

‘BiP’ Couple Noah and Abigail Tease Engagement: ‘That Is the Goal’

No Show! Why Prince Harry and Meghan Markle Missed The Party at the Palace

‘Too Fast’? The Reason Why Michael B. Jordan and Ex Lori Harvey Split