Too hot! Dancing With the Stars pro Sharna Burgess has one of the most enviable bodies around. She gets her ripped physique by staying active and eating right. However, she doesn’t deprive herself — yes, she even snacks — and works equally hard at staying mentally fit. 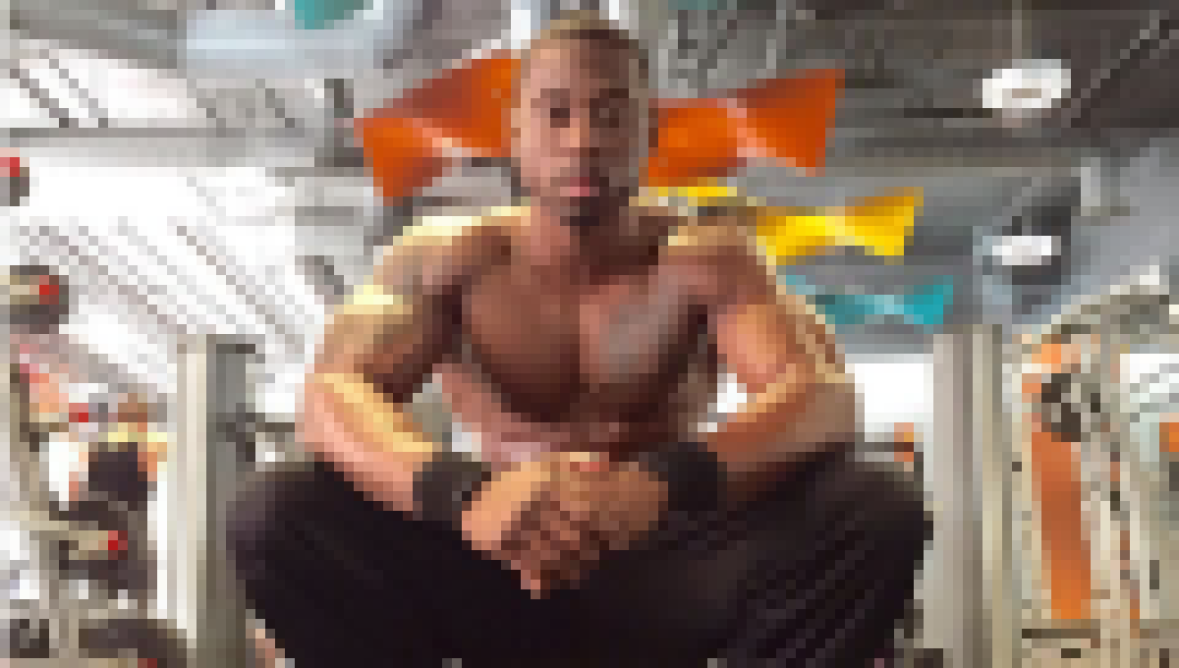 10 Fitness Tips From MackFit, the Celeb Trainer Behind Ariel Winter and Jordyn Woods

The Australian dancer returned to season 29 of DWTS, which premieres on September 14, after not being selected as a pro the prior season. Fans were shocked by her absence on season 28 considering her successful run during the 12 seasons she appeared on. She and radio personality Bobby Bones won the mirrorball trophy during season 27, and she came in second place with Nick Carter, James Hinchcliffe and Josh Norman in years past. During her interim, she appeared as a judge on Australia’s version of the dance competition show.

Needless to say, viewers are ecstatic to have her back. The activist swapped out her signature fiery red hair for blonde locks with pink ends, but her fit figure is as incredible as always.  The athlete got very real about the effects living through the coronavirus pandemic had on her mental and physical health before getting back to the dance studio.

“Quarantine fitness … it’s been an adjustment that’s for sure. As someone who loves the gym, loves her routine, loves the group classes and gets inspired by the environment … isolation and lockdowns didn’t exactly sit well with me,” Sharna began a lengthy post via Instagram on September 3. “It wasn’t until I was picked up for DWTS that I suddenly got the ‘oh [poop emoji]’ feeling. Waves of regret for all the Vegemite on toast instead of working out.” 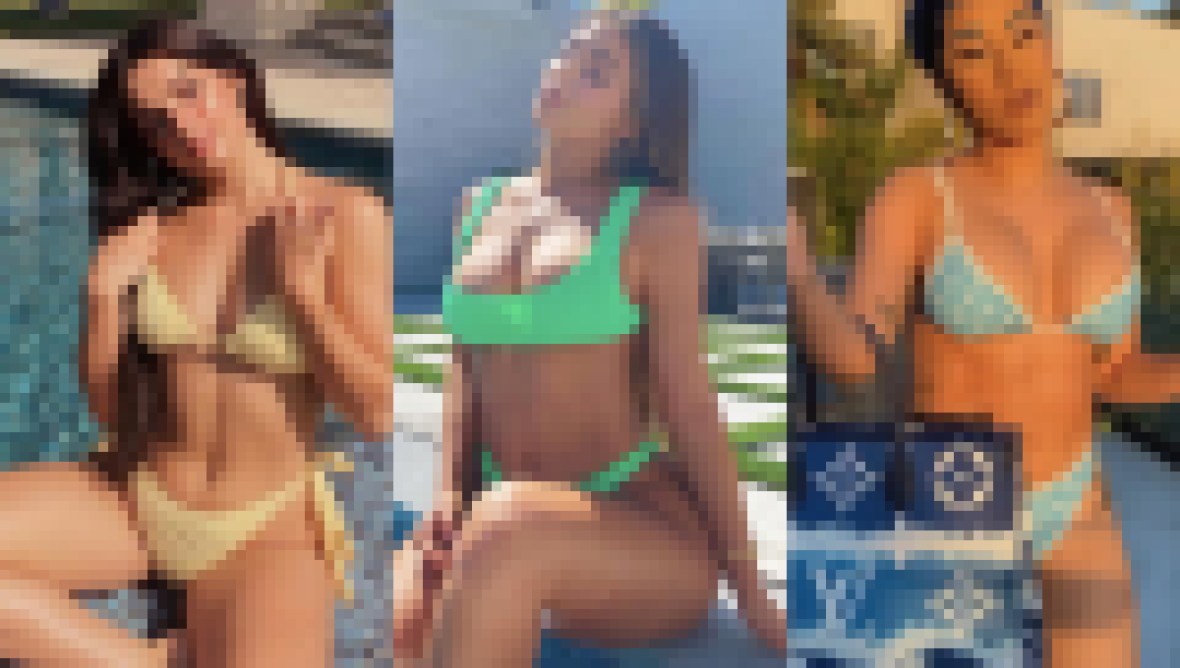 Too Hot! These Celebs Look Incredible in Teeny Bikinis and Swimsuits

Sharna confessed to having a “minor meltdown” after pulling out her “teeny tiny” DWTS costume, but it was more than an extra pound or two gained. “I didn’t feel connected to my core, didn’t feel the strength in my body and didn’t see the tone that I wanted,” she explained. “Because I wasn’t over the last few months honoring what my body needed with the excuse of ‘well … COVID.’ I was no longer feeling good about what I was seeing and feeling. I wasn’t feeling my physical body accomplish anything of merit when it’s used to doing that every day. No wonder I was feeling off.”

She added, “Have I lost a little of that weight, sure. But I’ve gained my muscle back, my strength and power that I love about my body so much is back and not because of a physical transformation, but because of giving it time each day between working out, meditating … hydrating, gratitude!!”

Sharna is serving as our major fitness inspiration. Keep scrolling to see the pro’s exercise and diet secrets!

She Likes to Keep It Short and Quick.

“I’m a big fan of Tabata because you get so much work done so quickly and you don’t even realize it,” she told Us Weekly. This method of the exercise consists of 20 seconds of intense effort (like burpees or mountain climbers) followed by 10 seconds of rest. “You’re sticking to a schedule, you can’t mosey about. You’re in and you’re out in eight minutes with this one.”

“What you want to remember is to keep your core engaged,” she noted about doing isolated moves like fire hydrants and flex leg pulses. “This isn’t just booty, this is essentially all over your body as well. You’re engaging your shoulders, you’re keeping yourself supported. Don’t let everything hunch and sink.”

Keep an Eye on What You Eat.

Snacking can feel like a minefield, but the athlete recommends just being mindful of anything you grab out of the cupboard. “The key to this is PORTION CONTROL,” Sharna wrote on her personal website. “You may not think another handful would make a difference, but times that handful by seven days or 30 days and before you know it, you’ve snacked your way to 7,000 calories.”

But, Don’t Make Yourself Miserable.

That’s not to say she wants people to starve, just set yourself up for success. She added, “I don’t believe in deprivation, I do believe in healthy choices and making sure those choices stay available to you. “

Rethink What Exercise Is.

“To me being fit means … you want it and you’re willing to do what it takes for it. It’s self-motivation, mind over matter and digging deep when it hurts the most.” The dancer explained that she uses fitness as a way to deal with negative things in her life.

“The best form of exercise is one that you enjoy,” Sharna told People in 2016. “Find a local dance studio, take a friend to hot yoga — make it a social thing if you struggle to find the motivation. Once there are changes in your body and your energy levels, that will be all the motivation you need.”

She’s Obviously a Fan of Dance.

The reality star even has her own Dance Cardio Series. She dished to ET this past summer that working the whole body is the secret to its effectiveness. “The dance workout uses every single muscle there is … Every single muscle is engaged … there’s a lot of rotation and isolation and using all those small muscles,” she said.

“Drinking enough water has made a massive difference in my skin and even my sleep,” the redhead divulged. “It helps flush toxins from your body naturally. Being dehydrated can easily cause you to snack more because you think you’re hungry when actually you lack energy because you’re thirsty.” She warned, “Drink before you’re thirsty, feeling thirsty is a sign you are already dehydrated.”

How to Feed That Salt Craving.

Sharna admits to having a salt addiction. She satisfies her cravings with seaweed snacks which she noted “aren’t for everyone.” The chip lover explained, “Once you get used to them, these 30 calorie snacks are the perfect replacement for a bad potato chip habit. So I get a little saltiness, but also, an excellent dose of micronutrients including folate, calcium, magnesium, zinc, iron, and selenium. “

It’s Not All About Moving Your Physical Muscles.

“We need to use the muscles of our mind if we want to be positive and motivated,” Sharna explained on her site. “This means positive self-talk, this means self-care and self-love. If we are not willing to be kind to ourselves then who on earth are you expecting to treat you with kindness.”

In Case You Needed Another Reason to Get Moving.

The girl can’t stop gushing about the benefits of exercise (and she’s not wrong). “Physical activity relieves anxiety, calms the mind, the nerves and brings you confidence from the inside out where you can battle some of those insecurities, straight on. Exercise is the space and time to push yourself and to feel proud of what you accomplish,” she said in a blog post.

The Aussie recommends blending herbal tea with half of a tablespoon of coconut oil and honey on her site. “Blending makes the tea frothy and more like a luscious, creamy latte rather than an everyday tea. The sweetness helps me swap it for a dessert, so my sweet tooth is happy.” She suggests chamomile tea to help drift off to sweet dreams.

What you do after a workout is just as important as what you do during. “Stretches and breathing are quick and effective ways to move the body and release tension both in the muscles and in the mind. I want to encourage each of you to stretch every day, just for 5 [minutes],” the beauty begged of her readers.

Thanks For the Motivation, Girl!

If you’re ever in need of inspiration, look towards our favorite redhead. We love how dedicated she is to keep her body and mind strong.

Drink water, stretch and don’t forget to have a little fun.
Can’t get enough celebrity content? Make sure to subscribe to our YouTube channel for fun, exclusive videos with your favorite stars!