It sounds like the first lady is going to be a-okay! Melania Trump underwent an "embolization procedure" on May 14 to deal with an ongoing kidney issue, which her office described as benign. Two days later on May 16, she took to Instagram to thank her doctors for their hard work and update the American people about her current condition and recovery.

"A sincere thank you to Walter Reed Medical Unit @WRBethesda & to all who have send good wishes & prayers!" she wrote beside an image that simply said "thank you." "I am feeling great & look forward to getting back home @WhiteHouse soon." This marks the first time Melania has spoken out about the surgery since her communications director alerted the public to the unexpected news on May 14.

A sincere thank you to Walter Reed Medical Unit @WRBethesda & to all who have send good wishes & prayers! I am feeling great & look forward to getting back home @WhiteHouse soon.

"This morning, first lady Melania Trump underwent an embolization procedure to treat a benign kidney condition," said Melania's communication director, Stephanie Grisham on Monday. "The procedure was successful, and there were no complications. Mrs. Trump is at Walter Reed National Military Medical Center and will likely remain there for the duration of the week. The first lady looks forward to a full recovery so she can continue her work on behalf of children everywhere."

The experience was even scarier because the 48-year-old had to go it alone. Her husband Donald Trump stayed at the White House while she had her invasive surgery, but later he finally made time for a visit. Trump's trip wasn't on the official schedule, but he still hopped on the Marine One helicopter to make the quick trek around 4:00 p.m. on May 14. "Heading over to Walter Reed Medical Center to see our great First Lady, Melania. Successful procedure, she is in good spirits. Thank you to all of the well-wishers!" he wrote on Twitter.

Heading over to Walter Reed Medical Center to see our great First Lady, Melania. Successful procedure, she is in good spirits. Thank you to all of the well-wishers!

While Melania is expected to be just fine, this is the most major surgery a first lady has ever had done while her husband was in office since Ronald Reagan's wife Nancy had a mastectomy in October 1987.

It is unclear whether the surgery was planned or done on an emergency basis, and no futher details were given about what specific condition she has. If you're unfamiliar with what a kidney embolization involves, Healthpoint describes it as "the deliberate blocking of the blood flow to the entire kidney, or a portion of it, by the placement of a blocking agent in a blood vessel (artery). A variety of agents can be used to block the blood vessel including gelfoam, PVA granules or metalic coils."

NCBI says the process can be used in the treatment of a variety of health issues, including "conditions such as symptomatic hematuria and palliation for metastatic renal cancer, renal tumors, treatment of angiomyolipomas, vascular malformations, medical renal disease, and complications following renal transplantation." Again, Melania has not explained what issue she was treating. We wish her a speedy recovery! 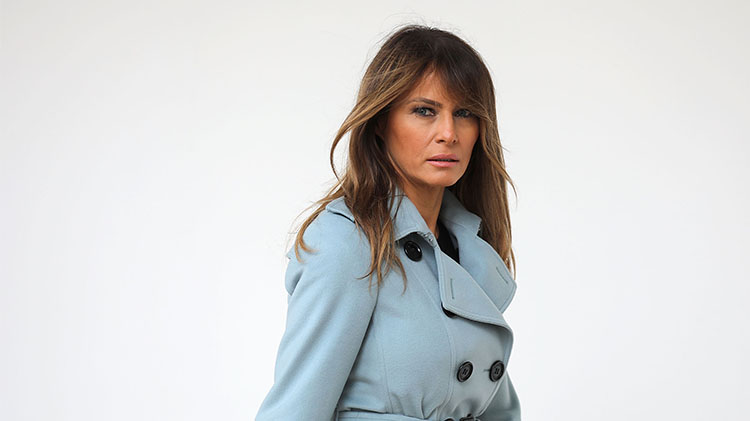