Could she be any cuter? Rob Kardashian shared a new precious photo of Dream via Twitter on Aug. 14, and not only is her smile is contagious, but her hair is flawless! He simply captioned the pic using two angel emojis.

The former Keeping up With the Kardashians star has been sharing tons of photos of his baby girl these days. Prior to this latest snap, Dreamy was rocking a pink Adidas ensemble and posing like a little model. Fans were obsessing over how adorable she looked with her pink headband and playful expression.

At only one-year-old, she’s already the ultimate fashionista and several of his followers couldn’t help but gush over the snap of her sitting by a teddy bear! “She is the cutest thing, it feels like she was just born yesterday,” one fan commented on his photo. “She’s grown up so much.” Another sweetly added: “LOOOOVE this matching outfit! She’s absolutely beautiful.” A third fan chimed in, “Love her she is such a doll. Good to see all is well with you two.”

Just two days before on Aug. 4, Rob took to the social media platform yet again and many couldn’t get over how much she looked just like her famous daddy. “My babyyyyyyy girl” he captioned the sweet shot. Up until that point, fans hadn’t seen a photo of his little one — whom he shares with his former fiancée, Blac Chyna — since May.

As a result, fans were thrilled to see the tiny tot. Someone commented, “I rarely open Twitter anymore, but this was a joy to see! Great job on being a regular, proud daddy! (As a mom, it’s always nice to hear you’re doing well… and not screwing up. Thought I’d send some love your way! #HappySaturday.” Another added, “Omg!  She is beautiful!! What a lucky dad!!” and a third chimed in, “She’s so big now.”

Rob has been laying low these days following his explosive social media tirade against Chyna. In July 2017, Rob decided to put Chyna on blast by accusing her of “f–king me and then this dude right after.” He even shared a picture of her private parts. “This is from Chyna yesterday to me. I never been so disrespected in my life. I just bought her $250K of jewelry yesterday,” he captioned the NSFW text messages. “This woman is so disrespectful and I don’t care.”

A source recently told People that Dream is what keeps him going these days. “He only cares about [his daughter] and loves spending time with her, but that’s about it,” the source explained. “He doesn’t seem excited about anything else.”

Here’s to hoping things have settled down between the two for the sake of their daughter. 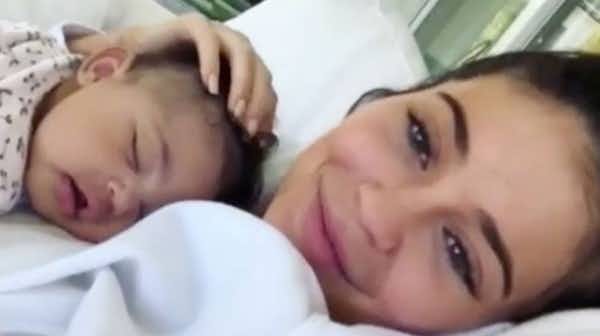