It seems like it was just yesterday that Arie Luyendyk Jr. dumped Becca Kufrin on national television, then realized that runner-up, Lauren Burnham, was actually his perfect match. Well, luckily the former Bachelor got his happily ever after because he and Lauren are expecting their first child in June 2019 and host Chris Harrison couldn’t be happier for them.

“I was so excited. He gave me a call and they were unbelievably surprised and excited. I’m so happy for them. He’s going to be a great dad,” Chris told Life & Style exclusively at KIIS FM’s iHeart Radio Jingle Ball presented by Capitol One. He continued, “He’s such a lover and he’s such a — I mean this in a loving way, he’s such a nerd and he’s such a goofy guy. Like he’s going to be such a good dad rolling around on the carpet with his baby, and they’re great.”

“They built their house, they built their home. And so everything’s kind of perfect for them right now. I wish them the best. I love him to death,” The Bachelor host continued. Aw, we love that Chris keeps in touch with former contestants!

Arie and Lauren revealed in June that the two bought a house together in Phoenix, AZ. The real estate broker captioned a photo of himself and Lauren holding the keys to their new home, “Officially new home owners! Annnnnd I have blue pants to match our door.”

Even though the couple is expecting, it won’t stop them from getting married on Jan. 12, 2019, in Maui, Hawaii. Arie posted a picture of their save the date card and wrote, “January can’t come soon enough.” The couple even created an Instagram account for their little bundle of joy! A week ago, Lauren showed off her 13-week old bump and said that their baby is “size of a peach.”

Hi 👋🏻 I’m 13 weeks old today! Last week I was the size of a plum and now I’m the size of a peach… it’s all about the fruits! I’m moving around lately so that’s been cool. I have lungs now which is new, I can even open my mouth! I’ve also been opening and closing my hands and I can suck my thumb too. Mom and Dad found out if I’m boy or a girl but they told me not to tell you guys yet, sorry. #sarienotsarie

“I’m excited for them to get married and now I know what to get them. Now they need baby gifts!” the 47-year-old exclaimed. LOL, so true.

So, Chris, do you need a plus one to the wedding? We’re available, just saying.

Love The Bachelor? Join our Facebook fan group to keep up with all of the drama!

Take An Inside Look At Lauren Burnham And Arie Luyendyk Jr.'s Insane Bachelor/Bachelorette Weekend In Vegas!

Arie Luyendyk Jr. Just Had A Slumber Party With All Of His 'Bachelor' Exes And We're Cringing So Hard 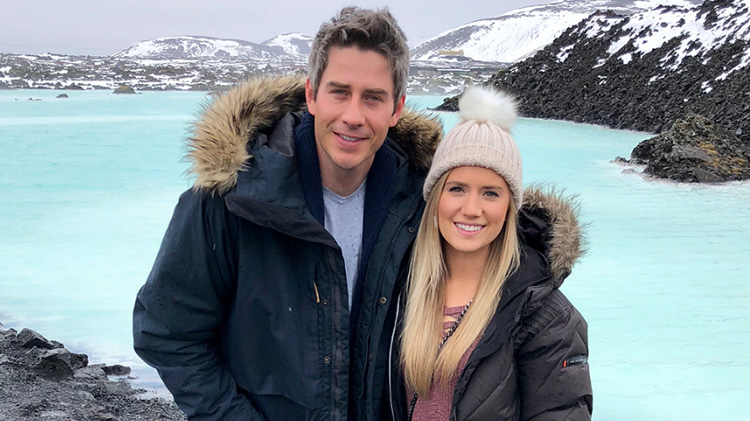 Lauren Burnham Dyed Her Hair Grey and Now She Kind of Looks Like Her Fiancé Arie Luyendyk Jr.
Top stories