In October 2019, news broke that Kylie Jenner and Travis Scott were “taking a break” from their relationship after nearly two years together … and our hearts broke! “Travis and I are on great terms and our main focus right now is Stormi,” the Keeping Up With the Kardashians star tweeted on October 2, referring to the pair’s daughter, Stormi Webster. “Our friendship and our daughter is priority.”

Just one look at this sweet couple’s past proves they’ve overcome tough times before — including cheating allegations made against Travis — so we can keep hoping and wishing for a reconciliation. Kylie and the “Sicko Mode” rapper started dropping hints in 2020 that they may be reconciling but ultimately, they are being cautious. 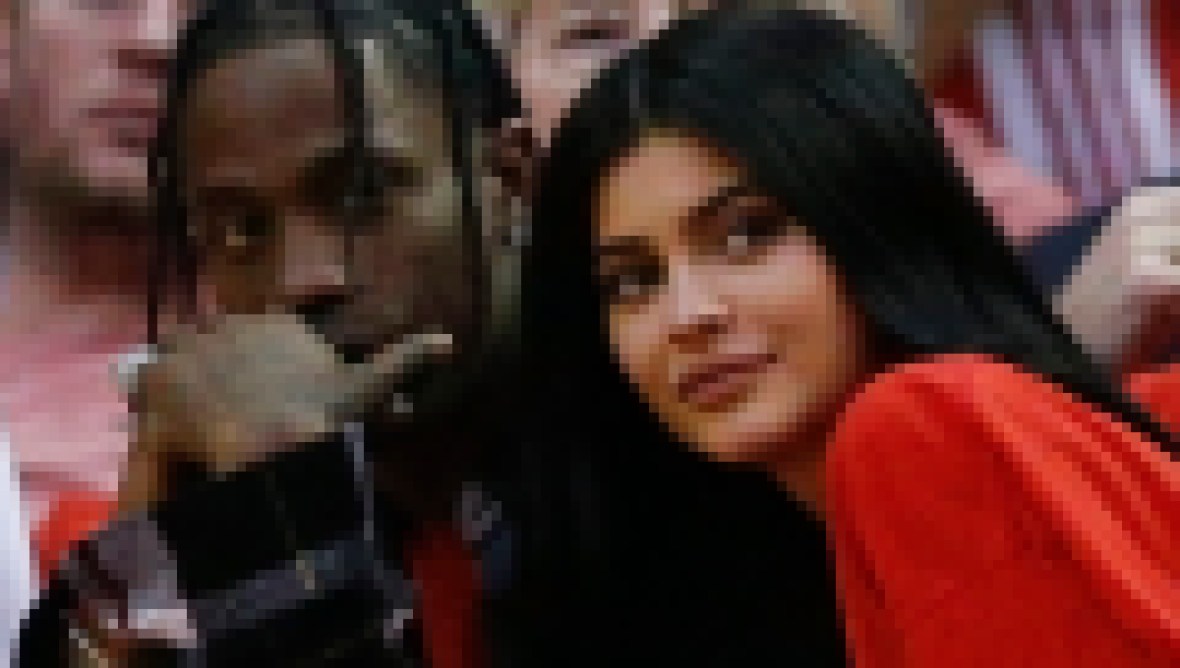 Travis Scott's Net Worth Is Nothing Compared to Kylie Jenner's

“They’re just being careful because they have to think about Stormi,” a source previously told Life & Style. “They don’t want to get back together and then break up, so instead, they’re taking it slow and trying to work out their differences.” While patiently waiting for Travis and Kylie to get back together, we took the time to explore their entire romance from the very beginning.

When the Kylie Cosmetics founder revealed she had given birth to a baby girl in February 2018, the world was shocked and yet …. not shocked at all. It was widely reported that the almost billionaire was expecting her first child with Travis. However, the California native was radio silent and disappeared from social media during her pregnancy until her big reveal on February 4 — just three days after giving birth.

Since then, Kylie and Travis seemed to grow closer and closer as they learned to raise Stormi together. Kylie continued to build her makeup empire, while her beau pumped out No. 1 hits. They got a couple of matching tattoos, and of course, Travis made some grand gestures to show her his love.

Though they may be taking some time apart, you can relive all of their special moments by scrolling through their complete relationship timeline (with photos!) below.

Not long after Kylie split from long-time boyfriend Tyga, she was spotted with Travis at Coachella (where all young celebs go to meet and hook up). Initially, it was reported that the two were just friends and that Kylie was simply trying to make her ex jealous. But, when the pair was spotted a week or so later looking “super hand-holdy” at an NBA playoff game in Houston, it was obvious they were more than just buddies. Kylie also showed up at Travis’ birthday party at the end of the month.

Kylie posted a photo with Travis to Instagram. Granted, it was a massive group shot at the Met Gala (and Travis was hiding his face), but still. That pretty much made it social media official. The two also jetted off for a romantic getaway to Miami later in the month. Travis was playing at the Rolling Loud Festival, and the two still hadn’t formally announced their relationship, but they were seen strolling around town arm-in-arm, so yeah. It was definitely on.

In a somewhat surprising move, Kylie and Travis got matching butterfly tattoos. She posted photos of the his and her ink to Snapchat.

Late summer was a busy time for Travis and his career, and Kylie was there to support him. In July, the star was spotted with her sister Kendall and model Bella Hadid watching Travis perform at the Wireless Festival in London. In August, Kylie was seen checking out Travis’ performance when he opened for Kendrick Lamar. After one of his August performances, Travis threw Kylie a surprise birthday party complete with an ice sculpture of her butt. #TrueLove. His other gift to her was reportedly a diamond necklace.

Nothing better than working with my family! Honored to be shot alongside my sisters for the new CALVIN KLEIN UNDERWEAR & CALVIN KLEIN JEANS global campaign. Thank you @calvinklein - Our Family. #MYCALVINS. #ad 📷 @willyvanderperre

It was widely reported that Kylie and Travis were expecting a daughter together — though Kylie refused to talk. The reality star disappeared from KUWTK and social media, save for a few shots where she was either wearing a baggy t-shirt or hiding her belly with a blanket.

February 2018 — The Truth Is Revealed

On February 1, 2018, Travis and Kylie welcomed their daughter. A few days later, on February 4, Kylie broke the news on — where else? — Instagram with a heartfelt post. Travis also shared the news on Twitter. Clearly, these two are happy as can be right now. Congratulations!

Proud papa, Travis, treated fans to the ultimate surprise in March 2018, sharing a darling close-up portrait of their daughter, Stormi Webster. “Our little rager!” he captioned the shot and it didn’t take long for fans to rave over how precious she was in the comments.

Talk about a power couple! Kylie and Travis dropped jaws from the moment they stepped on the scene at the 2018 Met Gala. The makeup maven showed off her post-baby body in a black gown, putting her tresses back in an up ‘do. She completed her fierce look with jewel-encrusted glasses and Travis looked suave as ever in his monochromatic ensemble.

July 2018 — Gracing the Cover Together

Kylie and Travis have definitely become one of the most talked about couples in the world, so it was no surprise they were offered the cover of GQ in July 2018. During the interview, she revealed one of the most romantic things he’s ever done for her.

“On my birthday, he woke me up out of bed at like six in the morning. He was like, ‘We gotta go,’ and I’m just like half asleep, like, ‘What do you mean? What do you mean?’ And he just starts pulling me, and the sun was just coming up, and he had flowers all the way down his house and violin players everywhere,” the reality star dished. Swoon!

Growing up so fast! Shortly after celebrating Kylie’s milestone 21st birthday in August 2018, the makeup maven and her family enjoyed Stormi’s first Halloween. She posted a sweet photo to her Instagram on October 24, showing her and Travis cuddling close to their daughter.

Much to the delight of fans, Kylie loves to document her escapades on social media and in November 2018, little baby Stormi followed her dad on his Astroworld Tour. We see you, girl! The makeup maven shared this PDA-filled snap while enjoying the trip.

Kylie sparked pregnancy rumors for the second time when she posted this lovey-dovey photo of herself kissing Travis, but that’s not what started the speculation. The makeup maven captioned the snap “baby #2?” It was later revealed that Kylie wasn’t expecting her second child yet, but that doesn’t mean they won’t give Stormi a sibling in the future!

The dynamic duo unfortunately faced some cheating rumors in March 2019, shortly after it was revealed that Tristan Thompson betrayed Khloé Kardashian by hooking up with Kylie’s BFF. “The reason he stayed home from his show tonight was very much because of illness,” Travis’ rep told E! News at the time, “strongly” denying the shocking allegations.

Clearly, Travis and Kylie are still head-over-heels. The pair was packing on some serious PDA during their “baecation,” shutting down any further speculation of trouble in paradise.

Stormi’s parents looked happy as ever while making an appearance at Kanye West’s star-studded Sunday Service held in Calabasas. Travis was photographed holding tight to his leading lady, even whispering into her ear from time to time. Ah, to be in love!

Kylie and Travis took some time to reconnect, just the two of them, during her big birthday trip to Italy. While most of the trip was spent with friends and family on a private yacht, they managed to sneak away to enjoy a little sightseeing together.

At the end of August, Kylie and Travis looked super cuddly while attending his Look Mom I Can Fly documentary premiere with little Stormi. They certainly seemed like a happy little family!

On October 1, sources revealed that Kylie and Travis were “taking a break” amid split rumors. The source remained hopeful that they may reconcile, because Kylie “really loves Travis,” and that “nothing could keep him” away from Stormi.

On New Year’s Eve, the former flames were both spotted at singer The Weeknd‘s big bash to ring in 2020 — though they were not photographed together, unfortunately. Womp, womp. Ky was spotted hanging with BFF Yris Palmer on her Instagram Stories throughout the night while Trav seemed to spend most of the evening with the party’s host. He even posted a photo with the artist on his Instagram feed. While we can’t be sure the one-time couple hung out, it’s not that far off with their positive stride since the split.

The billionaire called Travis “family” while they hung out after the 2020 Oscars on February 9 along with Khloé and Kourtney Kardashian.

Kylie raised some eyebrows when she shared three throwback photos on February 28 of the two sitting courtside at a basketball game during their first public appearance back in April 2017. “It’s a mood,” she wrote word-by-word across each slide on her Instagram Story.

In a heartfelt birthday post, Kylie hinted there was still something between them when she told Travis she would always have love for him. “Happy birthday to daddy of the year! I’m slowly but surely starting to accept the fact that Storm is a daddy’s girl,” she joked on Instagram. “But whatever. We went half on greatness! The most beautiful, smart, loving and funny little baby. The best gift. OK, I’m crying. Love you forever!”

When the rapper dropped a new song with Future called “Solitaires,” fans were convinced some of his NSFW lyrics were about the makeup mogul. “Wait. On ‘Solitaires’ by #Future and #TravisScott on #HighOffLife. Travis says ‘Been humpin’ wifey for so long, she got a limp when she walk.’ Did him and Kylie get back together?” one asked on Twitter. A second joked, “Travis Scott just said something about humping his wifey and all I can picture is Kylie Jenner shaking a chihuahua off her leg.”

She’s not just tight with her ex, she’s in with his whole family. On June 15, the Life of Kylie alum took to social media to celebrate Travis’ younger siblings. “Happiest B-day to the twins,” she wrote, sharing love for both “Auntie Jordan” and “Uncle Josh.”

She also helped Stormi’s dad celebrate Father’s Day by sharing a slew of photos on her Story, including a shot of the daddy-daughter duo standing in front of a blue floral arrangement for the holiday.

Early in the month, an insider told In Touch the pair was “not worried about” putting a label on their relationship. “Kylie is at a place in her life where she’s having fun and is not worried about what her future romantic relationship with Travis looks like,” they said. “They love spending time together and parenting Stormi.”

The coparents took what appeared to be a couple’s trip together halfway through the summer. Though they brought daughter Stormi along, an eyewitness told In Touch the exes made sure they had a little time for themselves while the toddler played on the beach. “I saw Travis and Kylie at the Rosewood Miramar Beach hotel on Friday. They left on Saturday,” the source said. “They were in the hotel room the whole time. The nanny and the bodyguard brought Stormi out to the beach, but apart from that they never left the room.”