Life & Style exclusively broke the news on July 30 that Clare threatened to quit season 16 because she had “fallen in love” with Dale just 12 days into filming. A few days later, the former pro athlete got down on one knee and got engaged to the Sacramento native.

While their quick romance seemed surprising at the time, the former wide receiver was “definitely looking for a serious relationship” when he joined the series, an insider close to Dale exclusively told Life & Style. “He was very excited to go on the show. He felt it was a good opportunity for growth and to meet somebody … I think his intentions for going on the show are just to give it a try.”

Prior to falling head over heels for Dale, Clare pointed to vulnerability as one of the biggest traits she was looking for in a husband. “The most important thing is, I want a man who will take off his armor,” the hairstylist said on Good Morning America shortly after she was announced as the Bachelorette. “I want a man who’s strong, who’s willing to take off the body armor, open himself up and be vulnerable. I think that’s some serious strength right there.”

The former Bachelor Winter Games contestant is the oldest leading lady in franchise history, and she saw that as a major plus for her journey to find love.

“I feel like a lot of people put [age] out there as this negative thing, but for me, it just is more years under my belt, more learning and knowing what I want, what I don’t want and what I won’t settle for,” the Bachelor in Paradise alum continued. “I’m wondering if they’re ready for me, for my age. I feel that would be more of an issue than me with them, because I feel so much younger at heart than my actual age. I’m proud of my age, but I just feel younger. That, to me, is what’s important.”

Despite the pair leaving the La Quinta Resort happily engaged, Dale revealed on January 19, 2021, that he and Clare split. “I wanted to share with you all that Clare and I have decided to go our separate ways. We appreciate the love and support we’ve received from so many people, but this is the healthiest decision for both of us at this time,” the former NFL player wrote in a statement via Instagram. 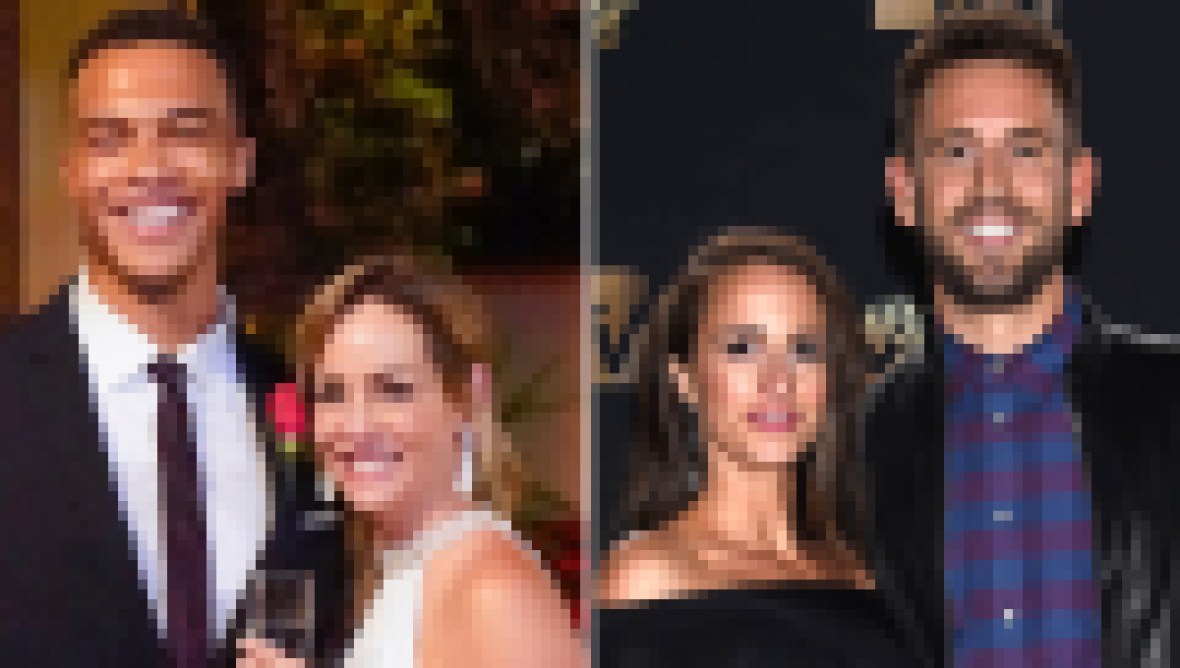 The athlete added, “We strongly believe in leading with love and always remaining true to oneself — something our families have taught and instilled in us throughout our lives. We only hope the best things for one another.”

Scroll through the gallery below to see Clare’s full relationship history, from Juan Pablo to Dale.

Clare opened up about being in an “abusive relationship” prior to appearing on The Bachelor in 2014.
“There’s so much more background that I have never even talked about, even on that season of The Bachelor, that I held inside, that I didn’t share with the world. I didn’t even share with my friends,” she told Rachel Lindsay and Becca Kufrin about her experience with an abusive ex on “Bachelor Happy Hour” podcast on June 23.

The reality babe was one of the final two contestants on season 18 of The Bachelor. Although JP gave his final rose to Nikki Ferrell during the final elimination ceremony, Clare was relieved after he made an unsettling comment to her, which was not caught on camera, during a helicopter ride.

“He chose to tell me something that no woman wants to hear,” Clare said during a private interview after the incident. “That he doesn’t know me and some sexual thing I don’t want to repeat. It was insulting and it was offensive.”

Clare appeared on the debut season of Bachelor in Paradise in 2014. She struck up a quick romance with Robert, a contestant from Desiree Hartsock’s season, but they fizzled out after the first week.

While on the beach in Mexico, she moved on with Zack Kalter, another one of Desi’s guys, and they dated for several episodes. However, their bliss came crashing down when AshLee Frazier told the stud that the hairstylist was a “cuckoo.” The drama led Clare to quit the show.

She tried her luck again during season 2 of Paradise with yet another one of Desiree’s exes. Their connection lasted approximately one date.

Jared and his now-wife, Ashley Iaconetti, were tangled in their fair share of drama before finally getting together for good — and Clare was caught in the crossfire. The California babe was involved in an awkward love triangle during season 2 of Paradise, and the drama led to Clare’s elimination.
The ladies have since buried the hatchet, and Ashley was even one of the early supporters for Clare to become the Bachelorette. “Clare and I had some beef back when she went on a date with Jared on BIP 2, but I became really good friends with her on Bachelor Winter Games,” Ashley told Us Weekly. “She is such a self-assured woman. She is not going to deal with anything that is below her. She will call you out, she is very smart, she is beautiful, she is very nurturing, warm.”

In 2018, Clare joined the cast of Bachelor Winter Games and had a connection with the former contestant from The Bachelor Germany. Their language barrier and Christian’s unwillingness to put effort into their romance made their flirtation fizzle out.

Although Clare and Benoit left Winter Games separately, they rekindled their romance off-camera. The Bachelorette Canada contestant proposed during the live aftershow in February 2019, but they split the following April.

Benoit exclusively told Life & Style he and his ex have “no negative feelings” toward each other after she was announced as the new Bachelorette. “All I want for her is to be happy because she deserves the best,” he gushed.

Clare’s romance with the season 16 contestant was intense from the beginning. When he came out of the limo during night one, the hairstylist gushed, “I think I just met my husband.”

The pair got engaged during episode 4, which aired in November 2020, and left the show together. It seemed things were going strong and they were even spotted house hunting in NYC and Clare’s native Sacramento, California, in December 2020.