From (almost) engaged to “great friends,” Hannah Brown and Tyler Cameron’s relationship timeline is full of ups and downs since they first met on The Bachelorette. The Florida native was the leading lady’s runner-up during season 15. However, their storyline goes on well after filming wrapped.

The former beauty queen broke things off with the Florida native during the finale of her season to get engaged to Jed Wyatt. The season 16 couple split shortly after when Hannah found out the musician lied about the extent of his relationship with ex Haley Stevens.

Hannah shocked fans (and Tyler) during After the Final Rose when she asked him out for “a drink,” and fans haven’t been able to get over their flirty chemistry. The exes stayed the night together (more on that below), but the Florida native struck up a short-lived romance with Gigi Hadid days later.

Although the reality TV pair have experienced some awkward moments in their relationship, they’ve managed to become very close friends over the past year.

“We want each other to be the best person we can be … If that’s being happy with other people, then that’s what we want,” Tyler said during an interview with Entertainment Tonight on Tuesday, February 9 about his friendship with Hannah.

That being said, when it comes to his dating life, the contractor is keeping his romances out of the public eye for now. “I keep that world private. There are just things I want to do for myself and work life and construction that I am excited about,” he added. “That really has my focus right now. I am extremely happy. Things are going great right now. I am pushing myself in new ways and am excited to see what has all come out of it.” 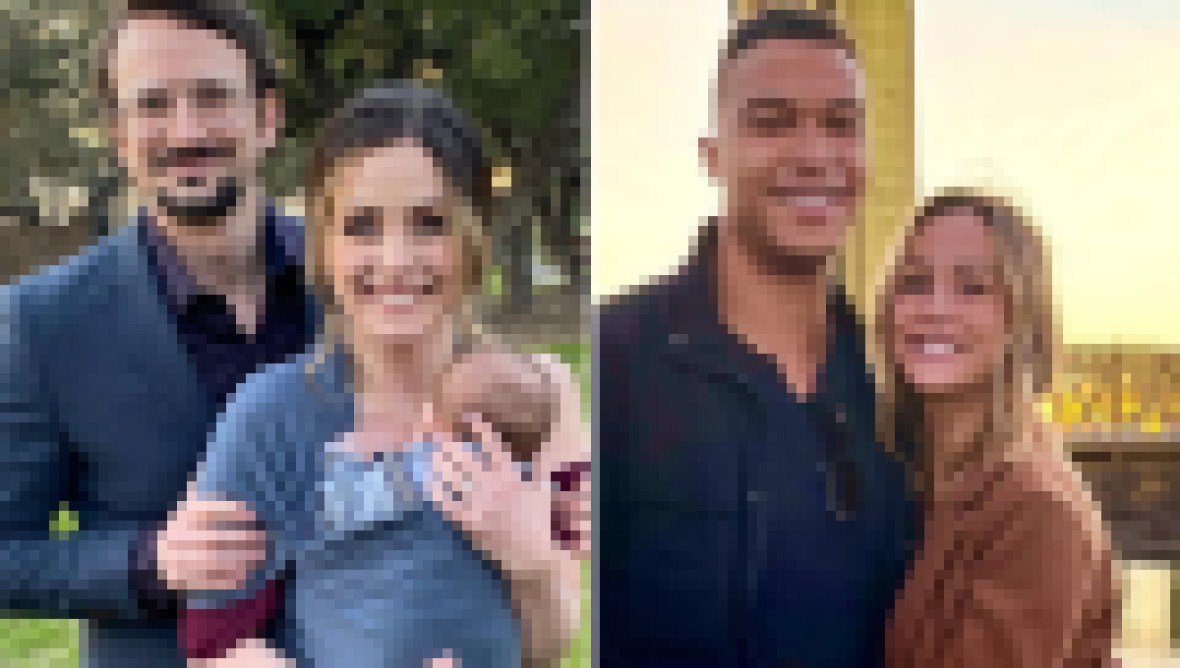 As for Hannah, she was single for over a year before she began dating again. “I am totally OK on my own,” the Dancing With the Stars champ expressed during an interview with Marie Claire in October 2019. “I don’t want to have to have a man to feel whole. It’s not that I need that to feel like I have a full life. No, I have a full life. Welcome into my life.”

There is a lot of history between these Bachelor Nation exes. Keep scrolling to see everything that’s happened between Hannah and Tyler!

Tyler stayed relatively low-key during season 15. He eventually stood out from the pack during his first one-on-one date with the Bachelor Nation babe. Although she was having a bad day from all the drama in the house, Tyler was extremely understanding and they ended up having a great time.

As the weeks passed, Hannah quickly heated up with her other final contestants — Jed Wyatt and Peter Weber — and Tyler later admitted that it made it difficult to catch up.
“She kind of always kept me at bay and never really … it took time for us to break down walls and stuff like that,” he explained during a February 6 episode of “The Morning Toast” podcast. “It kind of prolonged our relationship and made it harder for us to build it right away when it’s a game of ‘how quickly can you build a relationship?’”

Hannah getting engaged to Jed, whom she split from less than a month later, came as a shock to Tyler. “Our relationship really picked up a lot toward the end. I really thought I was going to be her guy and that we were going to make this work and it was tough, for sure,” he added on the podcast.

Sparks were flying when the exes reunited on After the Final Rose, which made Hannah shoot her shot.
“I’ve always said, ‘Yeah, I want someone to be bold.’ I’m bold, and I make bold moves,” the former beauty queen said to Tyler. “You’re an incredible guy, I’m a single girl. So, I don’t know, I thought maybe we could go for a drink and hang out.” He responded that he would “love to.”

Tell Us How You Really Feel

Tyler’s BFF Matt James publicly came for Hannah after her friendly drink invite because of the heartbreak she caused the contestant. “She better be buying,” he wrote on his Instagram Story.

Although fans were floored by the idea of Tyler and Hannah getting back together, the Alabama native explained that it wouldn’t be that simple.
“This drink is to see where we’re at and be friends and catch up. Because, ultimately, we cannot get back to where we were. That would really hurt everyone. Last time we were together … he was going to propose to me. I hurt him and that hurt me and I’ve been hurt through this,” she said during an interview with Jenny McCarthy on SiriusXM in August 2019. “For any type of a relationship for us to have, it has to start as friends and if it ends there then it ends as friends and I want to be supportive of him. I admire him and that is where we need to start off.”

Tyler was spotted leaving Hannah’s Los Angeles apartment on August 2 after spending the night, and fans everywhere were shook.

Just two days later, Tyler went on his first date with model Gigi Hadid in New York City.
“They were laughing and it seems like they were having a good time,” an eyewitness exclusively dished to Life & Style at the time. “It’s Gigi Hadid. Of course, Tyler was into it.”

Hannah opened up about Tyler’s whirlwind fling with the supermodel during an appearance on the “Bachelor Happy Hour” podcast in August.
“The thing is … we are not dating dating, at all, we hung out, but we also had conversations of both like knowing that there’s still something there,” Hannah explained to show alums Rachel Lindsay and Ali Fedotwosky. “And when you are in the public eye, you do just have to be respectful of each other. Yeah, I wish I would’ve got a little bit more than two days. But, you know, it is OK.”

Back on the Market

After being spotted all over the place together — including the funeral of Gigi’s grandmother in the Netherlands and the 2019 MTV Video Music Awards — Tyler and the A-lister called it quits in October 2019 after two months together.

In November, Tyler was seen making out with a mystery blonde, who turned out to be Kylie Jenner’s BFF Stassie Karanikolaou. The two seemingly crossed paths again during a party with wild animals at David Dobrik’s house, but neither have confirmed their fling.

Eagle-eyed fans noticed in December that Tyler deleted all photos of Hannah off of his Instagram. He previously said the two were “friends,” so his actions were definitely curious.

Tyler low-key let his feelings known after Hannah’s emotional appearance on Peter’s season of The Bachelor. The season 15 star confessed to the pilot that she has regrets “all the time” about the way things turned out between them. After the episode aired, Tyler “liked” a tweet that said he “wasn’t even [Hannah’s] second choice.”
In case you’re wondering, Hannah has officially closed that chapter with Peter, despite their tearful reunion. The starlet’s dad, Robert, exclusively told Life & Style that his daughter and the pilot are strictly platonic these days. “They’re just friends, they’re just friends. No, there’s nothing more there,” he said.

Tyler’s mom, Andrea, suddenly died in early March from a brain aneurysm. Many of his friends, including Hannah, rallied to support him. His ex reportedly flew to Florida to attend Andrea’s funeral.
“Hannah’s been down there just helping … It’s out of respect for them,” the leading lady’s dad dished.

Hannah gushed over Tyler on Instagram after he shared a candid post to raise awareness for organ donation. He said his mom’s tragic death gave “more life” to someone else, and she was able to make a “positive” impact one last time.
“Your momma would be really proud of you and how you are honoring her life with the platform you have,” the Bachelor Nation star commented on the male model’s post on March 13. “Proud of you too, TC.”

The brunette beauty flew to the panhandle state again on March 14 and was seen getting picked up by Tyler at the airport.

In With His Friends

Hannah and Tyler’s pal Matt officially buried the hatchet in March. “When you confront that internet bully,” the future contestant on Clare Crawley’s season wrote on Instagram.
“Lesson learned,” the former beauty queen quipped in response.

People need to chill out coming to my house taking pictures. I just got 2 dozen eggs and I’m locked and loaded

After a few unwelcome visits by photographers during Hannah’s trip to his hometown of Jupiter, Tyler told fans to stand down on the speculation. “People need to chill out coming to my house taking pictures. I just got 2 dozen eggs and I’m locked and loaded,” he tweeted.

Hannah’s dad exclusively told LS that Tyler and Hannah are “just friends” at the moment. “I don’t know if I’d officially say they were back together … They’re just like two kids,” he explained. Robert noted that his wife, Susanne, became close with Andrea through the reality show, which is why Hannah was down there to assist the Cameron family.
“That’s all it is to it. Nothing more, nothing less,” he said. “People want to read into whatever they want to read into, and we can’t stop that. But the reality is they’re friends.”

The exes revealed what really went down between them while they quarantined together in April 2020. “We were just trying to work on our friendship,” Hannah explained during a YouTube video with Tyler in October 2020.

“People think we were hooking up the whole time,” the former beauty queen admitted while noting they did not have a physical relationship while temporarily living together adding they were “both in a hurt place.”

The male model reacted to Hannah’s new relationship with boyfriend Adam Woolard and sent his support.
“I haven’t met him but seen pictures of him … Good-looking guy, so I’m happy for her,” the season 16 contestant said told ET in February 2021.